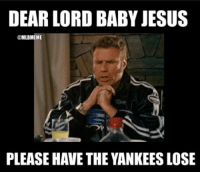 I fucking hate the New York Yankees! Anyone who knows me knows that my hatred for the bitchass Bronx Bombers runs real deep and it is not a secret. I can however, push my hatred aside and admit when they have a great team. This year, they have a great team, but there are also 2 other great teams in the MLB right now. The LA Dodgers and the Houston Astros are both great teams with aspirations to win the World Series.

The Yankees are not great like the Astros or Dodgers. The Yankees rotation is a fucking shitshow for Yankee fans to keep an eye on come October. You can talk to me all you want about chodes like Severino (if he ever comes back), Domingo German, and Tanaka, but those guys are all schmucks and are not aces! German has 16 wins with an ERA of almost 4! Their best bet in a deciding game of a playoff series would be to use Chad Green as their opener and let the bullpen do the work. That is not a recipe for success in October. They do not have a true ace like both of the other teams. Both of the other teams have at least 2 true aces in their rotations. Yes the Yankees bullpen is up there with the best of them, but the bullpen in October can only bail you out so much. Going back to 2009, the team with the worst ERA to win the World Series was that 09 Yankees team. Their team ERA was 4.26. This year their team ERA is 4.50, an entire quarter of a run worse. The Astros and Dodgers both have team ERAs under 3.75, and the Dodgers actually lead the league in team ERA at 3.35. The Yankees have a great offense, probably the best in baseball as they lead the league in runs scored and are top 3 in Slugging and OPS. The thing is though that the Astros and Dodgers are both in the top 5 in both all of those categories as well! The huge difference in starting rotations is what it will come down to in an ALCS matchup between the Yanks and Astros. Sorry Yankee fans, but it’s just not your year, so go fuck yourselves!

I couldn’t find this without the go sox, but I feel like I got my point across.

One of the biggest storylines of the last week has been how the Minnesota Twins have responded to the Indians catching them in the standings! They have won 4 in a row and currently sit 2.5 game ahead of the Indians. The Indians go into a 3 game set with the Mets where they will get their bitchasses smacked around by Matz, Stroman and Thor, so now is the time for the Twins to keep winning.

The Cardinals have caught the Cubs and are now tied atop the NL Central standings. The issue there is that the loser of this race is not guaranteed a playoff spot with 7 teams still fighting for the 2 NL wild card spots.

Little bit of a smaller issue but still an issue is the Oakland A’s taking 3 of 4 from Houston. I don’t think Houston’s NL West lead is in danger but it is down to 7.5 games so just something to watch for over the next month.

History was made again this week as this fuckin rookie from the Reds, Aristides Aquino, hit 4 more fucking home runs this week! That brings him up to 11 homers in 17 games! He actually hit his 11thhomer in his 16thgame making him the fastest person to reach 11 career home runs in MLB History. Whatever this fucking guy is eating or drinking, he needs to keep that shit up!