College football really is just the fucking best! On any given weekend you never know what is going to happen. Any team can go down to any opponent if they don’t come ready to play. The upset of the season and what may have been the upset of the decade almost took place this weekend. A few statement games from some other teams and we have a big shakeup in this week’s Power Rankings!

1-Alabama-Alabama demolished Ole Miss this week and although their competition has not been the stiffest, they are still sporting a fucking insane average margin of victory of 37 PPG. To win 1 or 2 games by that much is insane, but to do it for 5 games is fucking nuts! They have the Heisman frontrunner and the best coach in college football. They play their first ranked game of the season on the road next week and then have 2 more cupcakes before the game of the year against LSU.

2-Georgia-The Bulldogs were on a bye this week but I’m sure they watched real closely as UNC almost pulled off the upset of the year. Georgia has one of the most complete teams in the country with a good QB, great RB, great OL, and great defense. They currently have the biggest win of the season in the country with a win over ND, but in the SEC there are plenty of chances for big wins. They have Tennessee, South Carolina, and Kentucky before they get to the meat of their schedule in November.

3-Ohio State-Ryan Day has one of the most talented rosters in CFB from top to bottom and OSU probably has a top 5 defense in the country! They currently have the nation’s leader in sacks in Chase Young, as a team they are 4th in the country in INTs, 2nd in the country in YPG allowed and 4th in the country in PPG allowed. That defense plus an offense with Justin Fields and JK Dobbins makes OSU a strong national title contender. They face their first real test this week when MSU travels to Columbus.

4-LSU-Joe Burrow has been one of the 3 best players in the country so far this year. This is a completely different LSU team than we are used to seeing and they are fucking fun as shit to watch! Burrow has almost has many TDs and he does incompletions this year and he is right in the thick of the Heisman conversation. They have what should be an easy home game this week before they get Florida, Auburn and Alabama in 3 of the next 4 weeks.

5-Oklahoma-Lincoln Riley has not missed a beat. He may be the best offensive mind in college football because his QBs always seem to put in fucking work. Jalen went for 400+ in 3 quarters this week! A lot of QBs go their entire career not throwing for 400 yards and Jalen did it in 3 fucking quarters! This offense is clicking on all cylinders, but it’s the defense that worries me. Oklahoma travels to Kansas before the BIG XII game of the season where OU faces off against UT. That game will have huge playoff implications. That game will also show whether or not we can trust OU’s defense against a real offense. 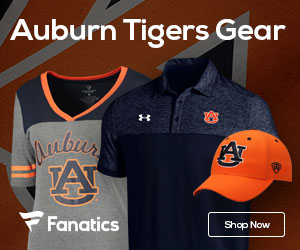 GET UP TO 65% OFF ALL AUBURN GEAR AT FANATICS!

6-Auburn-After a close Week 1 win, the Tigers just keep beating the shit out of whoever they play against. This week the victim was Mississippi State and boy was it a fucking route! The biggest lead was 40 and the final score was 56-23. Auburn is constantly running the ball down people’s throats with 6 people getting at least 3 carries and all of them averaging at least 4 YPC. They get a real test this week with a tough match-up against a Florida team looking to prove to everyone that they belong.

7-Wisconsin-Currently the Badgers lead the nation in YPG allowed and PPG allowed. Through 4 games they are surrendering less than 200 YPG and less than 8 PPG. That is ridiculous, especially when you consider that they have played 2 B1G games, 1 of them being against a top 15 team. Add on to that with Jonathan Taylor averaging almost 200 rush YPG and you have a team that is in the hunt for the playoffs! Of course they have a few road blocks in their way like a match-up at OSU, but they definitely play a style of football that can lead to upsets.

8-Clemson-I said if they continued to dominate they would not lose the top spot. Well they did anyting but dominate UNC and really have not looked great all year. They beat Texas A&M at home, but they did not look great and the win doesn’t even look so good now because the Aggies fucking blow. Trevor Lawrence looks like a completely different QB than we saw last year and the defense, as good as it is, is not what it was last year. That all came out this weekend in a game they really should have lost at UNC. They have 1 ranked team left on their schedule and it is Wake Forest and that is at home. Clemson will most likely run the table against the garbage ACC and this may be the easiest path any team has ever had to the CFB Playoff.

9-Florida-Everyone keeps shitting on the Gators and I don’t really know why. They are doing what every other top 10 team is doing, which is beating whoever they are playing. If you haven’t watched them you should, because their defense is for fucking real! They are tied for first in the country in INTs and tied for 2nd in the country in total sacks, plus they are 5th in the nation in scoring defense as well. They have a fucking gauntlet coming up though and if they want people to believe in them they will probably need to win at least 3 of the next 4 which come against Auburn, LSU, South Carolina, and Georgia.

10-Notre Dame-Notre Dame fell out of the top 10 after a tough loss to Georgia, but they jump right back in with a good win over a solid ranked Virginia team. The defense has come together for the most part, but Ian Book really needs to show out if ND wants to keep their slim playoff hopes alive. They have a couple tough matchups ahead with Michigan and USC but first they need to get by those chodes from Bowling Green.

11-Texas-After a bye, the Longhorns travel to West Virginia before their game of the season at the Cotton Bowl. I truly think Texas has the best overall team in the BIG XII. They have a better defense than most people realize and if any team in the BIG XII can contain Hurts it is the Longhorns. With that being said, stopping Hurts and that OU offense is no small task, but if they can do it, Texas might make some playoff noise down the stretch.

12-Oregon-Herbert has been amazing but that last second loss to Auburn will give the Ducks nightmares all season long.

GET UP TO 65% OFF ALL WASHINGTON GEAR AT FANATICS!

13-Washington-A big win over USC gets them right back into the Pac-12 mix which will be an exciting race to keep an eye on.

14-Iowa-An easy win over MTSU sets up a top 20 showdown in the Big House this week with Michigan.

15-Utah-The Utes got a big win in a blowout over Washington St this week and ensured they would be in the hunt for the Pac-12 title.

16-Boise State-Staying undefeated is their only hope at repping the G5 in the NY6. A couple tough match-ups loom so we will see if the Broncos can get it done.

17-UCF-The Knights responded in a big way with a blowout win over UCONN. They may jump BSU if they keep winning by 30+ points.

18-Oklahoma State-OKSt in my mind is not getting near enough attention. They have a top 3 RB and WR in the country and their only loss is a 5 point loss on the road at Texas. Watch for them as darkhorses in the BIG XII race.

19-Wake Forest-The Demon Deacons, against all odds, are undefeated through 5 games. If they keep it up their season will come down to a big road game at Clemson. Can they dethrone the champs?!

20-Arizona State-Herm Edwards has this team rolling into conference play. With only two ranked games remaining, can the Sun Devils make a run at the Pac-12 Championship?

21-Michigan State-Two big wins in a row have me more on MSU than I probably should be. Their true colors will show in a huge showdown with OSU this week.

22-Virginia-A tough road loss to a top 10 team in a game that they were competitive in for most of it keeps UVA in the rankings for now.

23-Memphis-After being undefeated through 4 games with one of those wins coming over an SEC team has Memphis in position to compete in the AAC.

24-SMU-For the first time since 1987 SMU is ranked in the AP Poll. They have not lost a game and are right there with Memphis looking for an AAC title.

25-Michigan-A blowout over the worst team in the B1G does not tell me anything about Michigan. I can still see Jonathan Taylor running all over the Harbaugh’s bitchass.

There are some great Week 6 showdowns with a bunch of ranked match-ups and a couple of possible trap games. These rankings may look completely different next week!